A project undertaken at The South Australian Museum and University of Adelaide and supervised by Stephen Donnellan, Adam Skinner and Mark Hutchinson

Brown snakes (genus Pseudonaja – Reptilia: Elapidae), are the leading cause of snakebite and snakebite deaths in Australia. Importantly, snakebite victims display variability in the extent of blood coagulation problems often leading to fatal cerebral haemorrhage. Despite the medical importance of the brown snakes, our understanding of how many species of brown snakes exist and how they can be reliably distinguished is not usefully resolved. This continuing state of affairs significantly prohibits further understanding of the factors responsible for variation in patient response to envenomation because the exact identity of individual snakes cannot be reliably established. 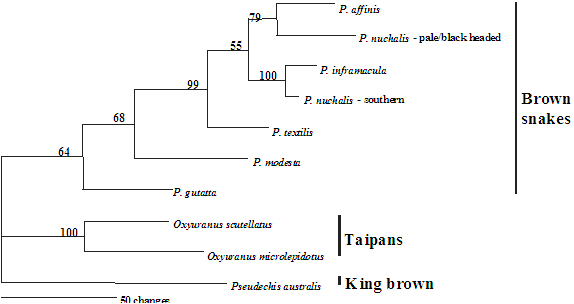 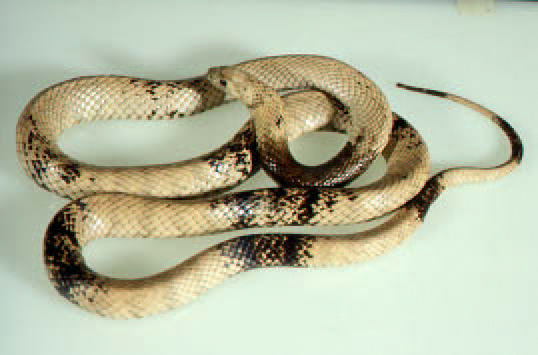 Distinctive colour and pattern variants currently included in the western brown snake, Pseudonaja nuchalis. However our APSF funded research shows that they are different species.

The aim of the project is to produce a comprehensive national systematic review of the medically important, widespread and common brown snakes using data from chromosomes, proteins and DNA sequences of mitochondrial and nuclear genes and morphology. These data will allow the recovery of the phylogeny of the genus, providing one of the main components for biologists to assess the origins, evolution and relationships of a significant part of the Australian biota.

Evolutionary relationships among the brown snakes have never been subject to comprehensive analysis in part due to the lack of appropriate molecular technology until recently and in part due to the lack of knowledge of how many species of brown snakes actually exist. We can now address both of these limitations as we have developed the appropriate molecular “tools” and we have made enough progress to be certain of which populations of brown snakes to include in a phylogenetic analysis of relationships among brown snake species. An additional issue is whether the two taipan species (genus Oxyuranus) are more closely related to some of the brown snake species as some previous studies based on protein variation have indicated without strong support.

To date we have obtained DNA sequences for two nuclear genes from seven of the eight species of brown snakes and the two species of taipans. We have attempted to obtain gene sequences for the eighth species P. ingrami. This has proved problematic as tissue samples optimal for DNA analysis from this rare species are not presently available.

A phylogenetic analysis of these data is presented in the accompanying figure. The numbers along the branches in the accompanying figure represent a measure of support from a procedure called the bootstrap. Bootstrap values of 70% or more are regarded as strong support that the node in the tree does actually exist in the phylogeny of the species concerned, ie it is not a sampling artefact.

The principle findings of the analysis are:

In summary many of the problematic aspects of the evolutionary relationships of the brown snakes are now much clearer with the availability of gene sequences. The remaining few poorly supported relationships should be clarified with the addition of more nuclear gene sequences from markers that we have already identified in the past six months.