What is the basis of the differing pest status of two species of Australian fruit flies? (APSF 04-4)

A project undertaken at theFruit Fly Research Centre, School of Biological Sciences, University of Sydney, and supervised by Kathie Raphael

Two Australian tephritid fruit flies Bactrocera tryoni and Bactrocera neohumeralis are serious pests of horticulture in eastern Australia. The two species are very closely related in terms of both DNA sequence and morphology. They are distinguished at the phenotypic level by a colour difference and by mating time. B. tryoni has yellow humeral calli (Figure1) and mates at dusk; B. neohumeralis has brown humeral calli (Figure 2) and mates in bright light in the middle of the day. The two species have the same or an extremely similar host range, and an overlapping geographic range, but differ in bioclimatic potential and hence pest status. Since the introduction of horticulture to Australia in the mid 19th century, B. tryoni, but not B. neohumeralis, has spread south from an original endemic habitat – the rainforests of eastern Australia – into temperate fruit production areas. The situation provides a very interesting example of species differentiation maintained in sympatry. We are undertaking molecular studies with the aim of understanding the genetic nature of the species difference. 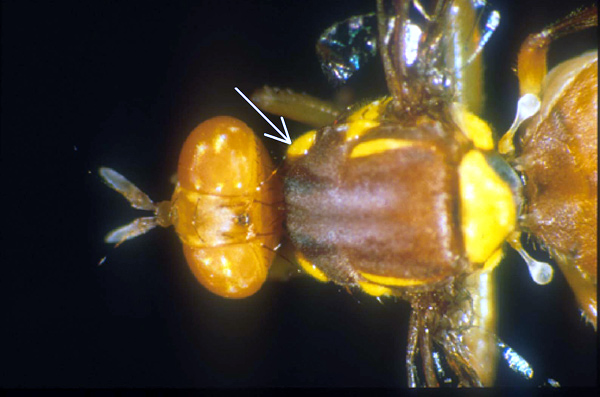 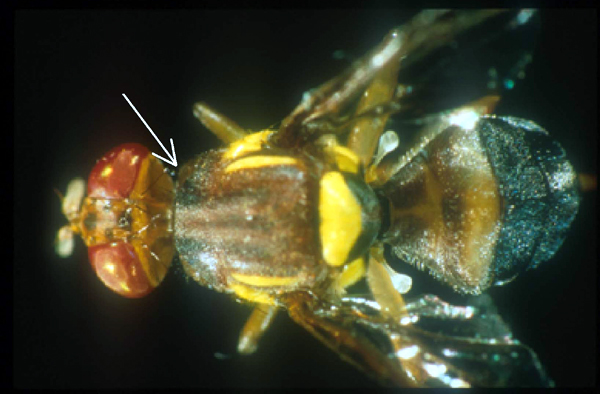 A genetic basis for the difference in mating time between B. tryoni and B. neohumeralis has been demonstrated. Hybrids are viable and fertile and hybrid lines have been selected on the basis of mating time. These lines can be used to screen for the molecular correlates of behavioural differences. Genetic variation at the DNA level between the two species is extremely low. This has led us to hypothesise that the sibling Bactrocera species are defined by differences in a limited number of genes that have determined and maintained the speciation event, including the genes responsible for the difference in mating time and bioclimatic potential.

We have carried out a screen for genes, which are expressed differently in the two species, using the technique of Representation Difference Analysis. In an analysis of ten candidate genes, we found one, pXA5, which is expressed at a significantly higher level in B. tryoni than B. neohumeralis. The aim of the project is to characterise the pXA5 sequence to determine if this gene contributes to the different behaviour and pest status of B. tryoni and B. neohumeralis. To date we have isolated only a small non-coding region of the pXA5 DNA sequence. In this project we will:

The study has broader implications for the understanding and management of pest species in Australia. If there is gene flow between species why hasn’t B. neohumeralis spread south or are B. neohumeralis genes absorbed into the B. tryoni gene pool? With global warming, will B. neohumeralis tend to spread south? If there is interbreeding in the wild, is the bioclimatic potential of B. tryoni a trait that will be selected for in the resultant hybrids? The study of the genes that differ between the two species of fruit fly provides a starting point for the investigation of these questions.