A project undertaken at the School of Applied Sciences, University of the South Pacific, Fiji, and supervised by Clare Morrison

The Fijian Crested Iguana, Brachylophus vitiensis, is endemic to the Fiji Islands and is currently listed as Critically Endangered under current IUCN criteria (2002) and is the only Fijian reptile listed as Endangered in the Fiji Biodiversity and Action Plan (1998). The species is restricted to dry forest habitats (which in itself is one of the most threatened vegetation types in the Pacific) and has experienced several local extinctions in the recent past due to extensive destruction of this habitat. It was once known from 14 islands in the western part of Fiji however, recent surveys in the past two years have only confirmed the species on three islands – Yadua Taba, Monuriki and Macuata. Yadua Taba is the stronghold for the species, containing approximately 98% of all individuals (estimated to be > 6,000 animals) and is the only legally protected population (Yadua Taba is a National Trust of Fiji reserve). 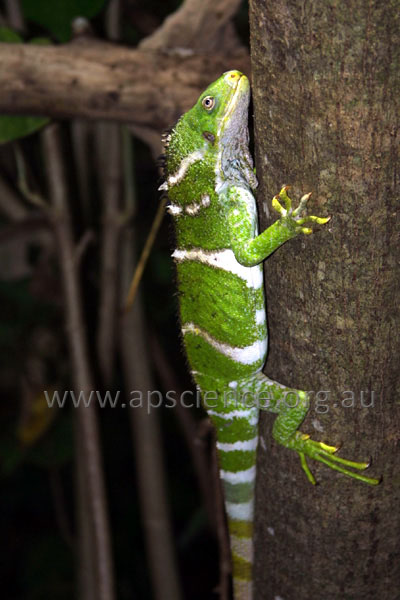 A male B. vitiensis from Yadua Taba 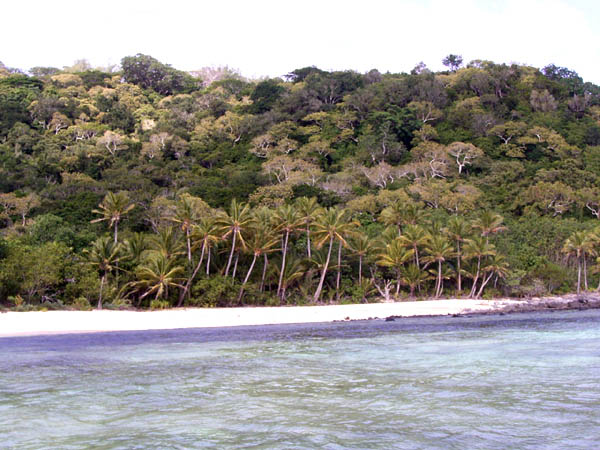 In November 2004 a Conservation and Management Plan Workshop for the Fijian Crested Iguana was co-hosted by the National Trust of Fiji and the IUCN Iguana Specialist Group. Due to the declining nature of many of the populations of B. vitiensis (other than Yadua Taba) as a result of the continuing degradation of dry forest habitat and predation by exotic predators (mainly cats), members of the workshop identified a critical need for the implementation of immediate and effective conservation actions. Conservation progress however, is severely impeded by the acute lack of basic biological information including iguana abundance, diet and reproductive biology.

Yadua Taba is a small (70ha), unihabited volcanic island located in the north west of the Fiji Islands (16o50’S, 178o20’E). It reaches over 100m in height and lies 120m off the much larger inhabited island of Yadua (1360ha). Four distinct vegetation types have been previously recorded on the island – coastal strand (beach/littoral), rocky cliff, dry forest, and grass & shrubland. Goats were introduced to Yadua Taba in 1972 and numbered over 200 by the late 1970s. The dry forest vegetation on the island during this time was severely depleted by a combination of grazing and fire used to drive goats for ease of capture. After the island was declared a sanctuary in 1981 all but a few goats were removed and fires banned. Today no goats remain on the island (the last 2 were captured in 2002) and the dry forest on the island has recovered to a remarkable extent and is currently one of the best remaining examples of dry forest and coastal strand vegetation in the Pacific.

While the population of B. vitiensis on Yadua Taba is currently secure, there is always the threat of “having all your eggs in one basket”. The introduction of disease, wildfire, or the threat of invasive alien plant species are potential real threats and are capable of decimating this population in worst-case scenarios. As such, participants of the Iguana Workshop recognised the need to consider translocations of some of the iguanas on Yadua Taba to other islands in the region including those which were once home to this species. The translocation of any species including B. vitiensis requires selecting sites with suitable habitat (for both diet and other ecological factors) however as previously mentioned, the local extinction of B. vitiensis from many of the other islands was primarily due to habitat destruction. As such, reintroducing iguanas to these islands will involve ensuring that suitable plant species are reintroduced to these islands. This is currently not possible as there is little documented and substantiated evidence as to the specific plant species requirements of B. vitiensis.

While national and international interest in B. vitiensis and its conservation is at an all time high there has still been limited public awareness and involvement in conservation issues in Fiji. In addition to providing critical biological information on B. vitiensis, this project can also increase public awareness of the threats posed by predators, habitat loss and degradation (due to increasing fire frequency, expansion of goat grazing, increasing demand for agricultural land, increasing spread of invasive plants and uncontrolled tourism development). It is through this increased public awareness that some of these detrimental activities may be minimised or even stopped on islands throughout the range of B. vitiensis. In addition to “on the ground” conservation actions, the information collected can also be used to aid on-going captive breeding programs for B. vitiensis. Kula Eco Park is currently housing a captive breeding colony of B. vitiensis on Viti Levu (currently 28 iguanas) and will be able to use any information on diet preferences and reproductive biology to improve its breeding program.

The overall aim of this project is to determine the dietary and other ecological habitat requirements of B. vitiensis on Yadua Taba with a view to improving the effectiveness of management and conservation actions in relation to B. vitiensis throughout the Fiji Islands.

The primary outcome is a more improved and thorough understanding of the dietary and other ecological habitat requirements of B. vitiensis on Yadua Taba.

More specifically the outcomes are:

A. Diet
Twenty-six plant species were identified in the scats of 233 iguanas. The most common species were Vavaea amicorum Micromelum minutum, Diospyros elliptica, Jasminum didymium, and Hibiscus tiliaceous
Of the 26 species found, the leaves of 21 species were eaten, fruits 14 species and flowers 6 species. Ten species provided more than one food category (leaves, fruits, flowers) while four species provide all three categories; V. amicorum M. minutum, D. elliptica, and J.didymium. For five species only the fruit was consumed; Antirhea inconspicua, Alyxia stellata, Capparis quintifolia, Dendrelobium umbellatum and Pyschotria tephrosantha.
With the six most common diet species, iguanas exhibited a clear preference for V. amicorum (present in 62% of scats) a result that did not vary with season. There was no difference in diet between adult males and females nor was there a difference between adults and juveniles.

B. Perch sites
The 1425 observed iguanas were found in 33 tree species. The majority (70%) were found in six species; V. amicorum M. minutum, D. elliptica, Mallotus tilifolius, H. tiliaceous, and Kingiodendrum platycarpum.
In general, iguanas exhibited a clear preference for V. amicorum (34% of all records) and D. elliptica (22%), a result that did not vary with season. There was no difference in perch tree preferences between males and females.

C. Floral composition and utilization
We recorded 43 tree and shrub species on the six transects. The most abundant plant species were V. amicorum (37% of all plants), D. elliptica (21%) and M. minutum (19%). The densities of major food plants ranged from 0 to 1400 plants/ha with most species being distributed over much of the island (e.g. V.avaea amicorum) while a few were more restricted (e.g. Cynometra insualris).

E. Iguana Abundance
The density of iguanas ranged from 38 iguanas/ha in casuarina forest to over 360 iguanas/ha in coastal forest. On average, the density of iguanas was highest in dry forest followed by coastal forest.
Based on our iguana surveys and habitat mapping results, the overall abundance of iguanas on Yadua Taba is roughly 12, 870 iguanas. It is unlikely that we observed all iguanas on each of the transects (due to their cryptic nature) subsequently, these results are conservative estimates of the abundance of iguanas in the different habitats throughout 2005-2006.

In order to translocate B. vitiensis, there must be no predators and competitors (cats, dogs, mongoose) in the new sites and the dry forest must have remained intact or have recovered to near natural state. We also have to make sure that the tree species that the iguanas need are present on the site.

The tropical dry forest species that are essential to B. vitiensis on Yadua Taba based on diet and perch preference are V. amicorum M. minutum, D. elliptica, H. tiliaceous, M. tilifolius, C. insularis, and K. platycarpum. Other species that are not essential but whose presence would provide more diversity in the diet of B. vitiensis are Evratamia orientalis, Gyrocarpus americanus, Eugenia rariflora, Antirhea incospicua, Canthium odoratum, and J. didymium,.

In general, B. vitiensis are more abundant in dry forest habitats followed by coastal forest on Yadua Taba. Islands still possessing intact dry forest habitat (and no predators) should be targeted for translocations should they exist. If not, potential translocation islands based on previous presence of B. vitiensis, previous habitat, with information on the current status of disturbance and predator presence should be identified and appropriate measures taken to ensure at least one of them meets the requirements for B. vitiensis translocations.