Sexual conflict and sympatric speciation in the Pacific (APSF 08-5)

A project undertaken at the School of Biological, Earth and Environmental Sciences, University of New South Wales, and supervised by Dr Nikolai Tatarnic

Conflict between males and females over mating is thought to fuel intense evolutionary arms races between the sexes, through a process known as sexually antagonistic coevolution (SAC) (Rice 1996; ). SAC is thought to drive rapid evolutionary change in morphology and behaviour (Chapman et al. 2003), and has even been invoked as a vehicle for speciation (Gavriletts 2000; Chapman et al. 2003; Arnqvist and Rowe 2005). 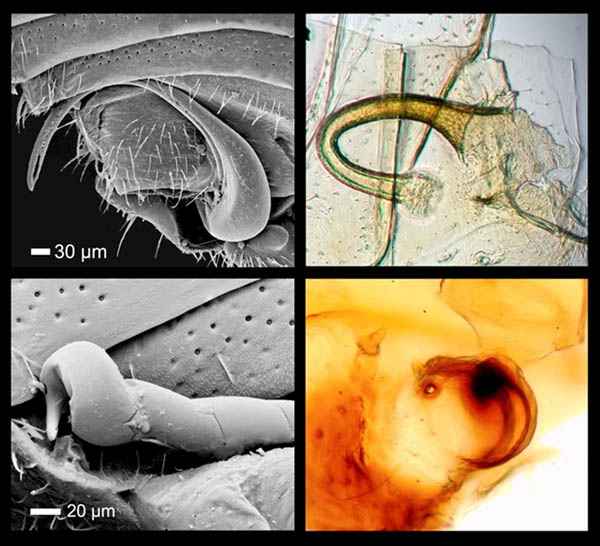 Figure 1. Correlated male (left) and female (right) reproductive morphology of Coridromius nakatanii (above) and C. sommelieri (below). In both of these species, the male intromittent organ is complemented by a sclerotized copulatory tube in the female. 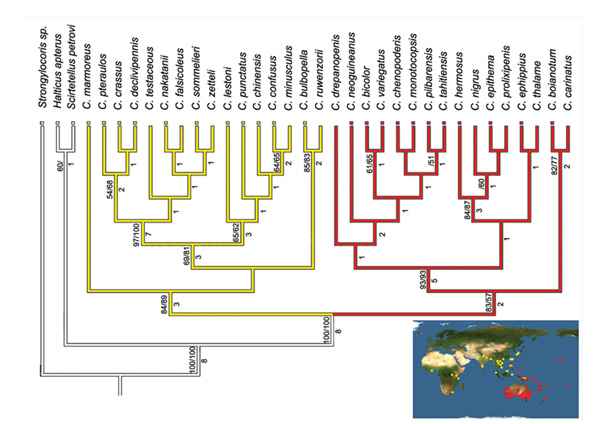 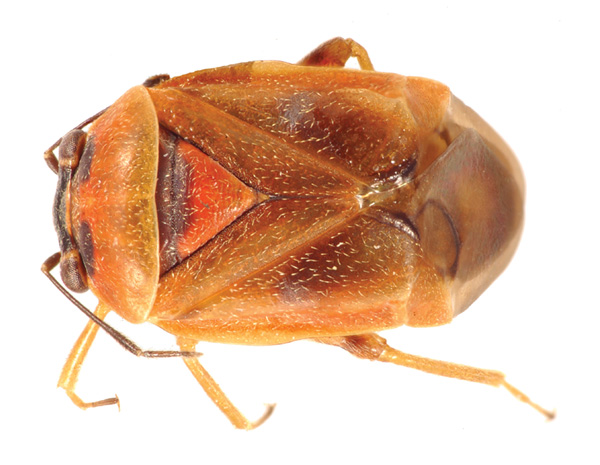 In the plant bug genus Coridromius, mating takes place by traumatic insemination (TI): males bypass the female genital tract, instead stabbing their partners with hypodermic genitalia and ejaculating into their blood (Tatarnic et al. 2006). In response, females of many TI species have evolved elaborate paragenitalia at the site of copulation to reduce the costs of mating. TI was first discovered in bedbugs (Carayon 1966) and is thought to have arisen either as a means for males to circumvent female mating resistance or as a product of male-male competition (Arnqvist and Rowe 2005; Reinhardt and Siva-Jothy 2007). TI is an incontrovertible example of a conflict trait, as males obligatorily damage females to promote their own reproductive success, and females coevolve paragenitalia to reduce these costs.

In our recent revision of Coridromius (Tatarnic and Cassis 2008) we identified several unique and elaborate paragenital forms and increased the number of described species from 11 to 33, with many of these found throughout the South Pacific. Several localities, such as New Guinea and Borneo, have been identified as areas of endemism for the genus, harbouring several species with overlapping distributions. These findings made us question why so many species are sympatric, and how this might reflect underlying mechanisms of evolution.

Antagonistic coevolution:
To assess patterns of male and female evolution, we reconstructed a phylogeny of all known Coridromius species.  Using this phylogeny and phylogenetically statistical methods, we demonstrated that male genitalia and female paragenitalia are coevolving. In those species where the male intromittent organ differs from a simple scythe shape (e.g. is twisted, thickened, laterally compressed, etc), this is matched by paragenital modifications in the female These results have been published in the Journal of evolutionary Biology (Tatarnic & Cassis 2010). This pattern is consistent with a coevolutionary arms race, driven by sexual conflict.

Species Diversity:
We described an additional 8 species of Coridromius, bringing to 41 the total number of known species (Tatarnic and Cassis 2013a. We suspect that many more species remain to be discovered in Africa, Southeast Asia, and throughout the Pacific.

Sympatric speciation:
Our research into sympatry yielded some unexpected results. While our results at the macroevolutionary level show a pattern of male-female diversification consistent with a co-evolutionary arms race (Tatarnic and Cassis 2010), we have also uncovered evidence that interspecies interactions might play an equally important role in the evolution of this genus. Reproductive interference occurs when reproductive interactions between species are costly to one or both species involved (Gröning and Hochkirch 2008). Through this project, we discovered a pair of Coridromius species living sympatrically on the same host plants in Tahiti. Significantly, both species exhibit elaborate and divergent paragenitalia, and are inseminated through different parts of the abdomen. Furthermore, both sexes of one species appear to mimic males of the other. We interpret this reproductive character displacement and interspecies sexual mimicry as mechanisms to limit interspecies copulations: the former makes interspecies mating physically difficult, while the latter reduces the attractiveness of one species to the males of the other. These findings have been published in the American Naturalist (Tatarnic and Cassis 2013b), and were recently reported in Nature (http://www.nature.com/news/tahitian-gender-bending-bug-avoids-stabbing-sex-1.13571).