A project undertaken at the University of Queensland and supervised by Dr. Ulrike Siebeck, School of Biomedical Science, Sensory Neurobiology Group and Maxi Eckes (PhD Candidate), School of Biological Science.

We are investigating the physiological ecology of solar ultraviolet (UV) absorbing compounds known as mycosporine-like amino acids found in the external epithelial mucus, and UV-induced DNA damage repair in coral reef fish of the Indo-Pacific. 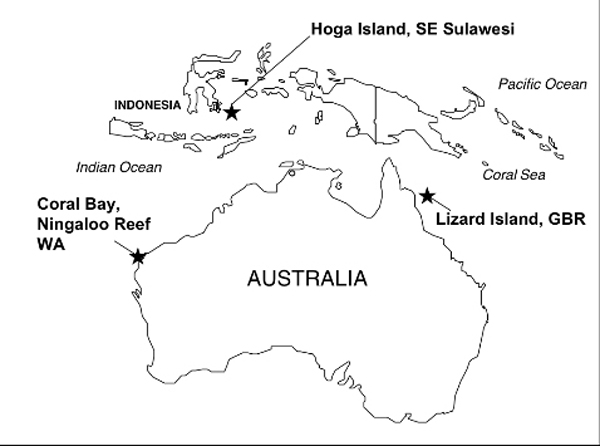 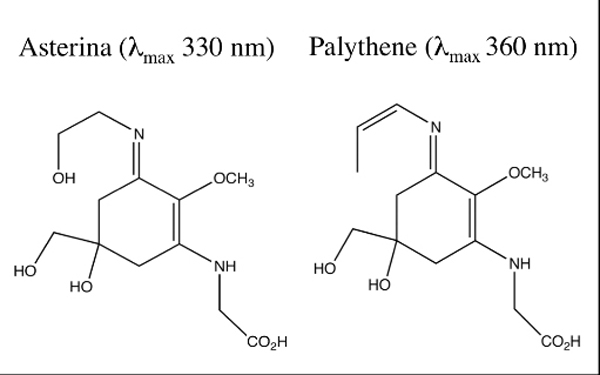 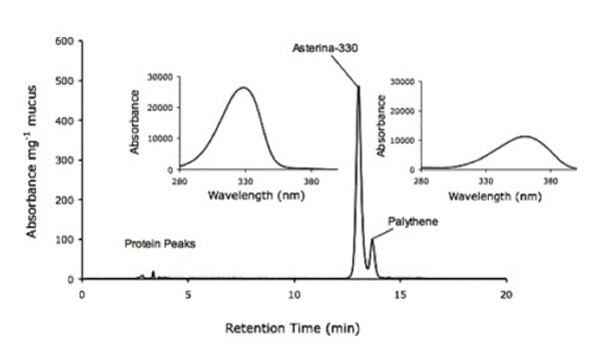 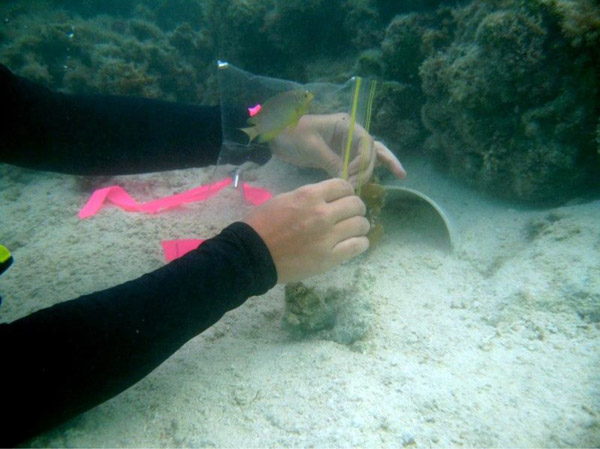 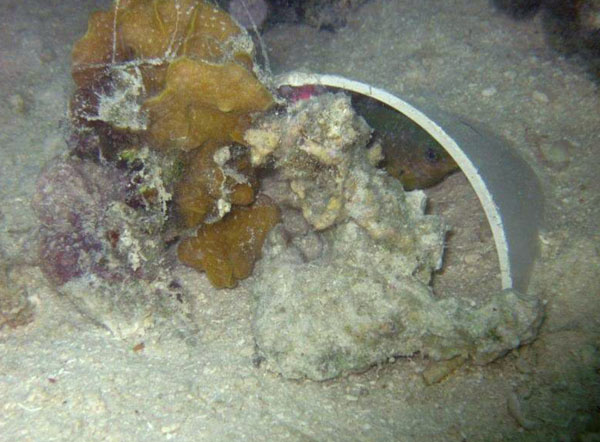 Figure 5. Ambon damselfish being translocated from shallow to deep and vice versa. As soon as the ziplock bag is opened the fish seek shelter in the half-pipes provided and adopt these as their ‘home’ in 90% of cases.

We usually associate UV radiation (UV) with negative effects, such as skin cancer and DNA damage caused by a part of sunlight we cannot see (Gallagher & Lee, 2006) and we are reminded daily to protect ourselves with sunscreens, sunglasses and hats. Fur and feathers protect the skin of many animals, and UV-absorbing compounds are often found in animal eyes to protect their sensitive visual tissues (Siebeck & Marshall, 2000). Incredibly, however, instead of protecting their eyes from UV radiation, there are animals, including some birds and many coral reef fish that are using this waveband for communication (Bennett, 1994; Siebeck, 2004). How do these animals cope with the negative effects of UV radiation? What is of great concern is that UV levels have been rising and are predicted to continue to rise, as part of climate change (Zepp et al., 2007). This rise is predicted to be particularly acute for aquatic animals as the transparency of water to UV radiation is increasing (Schindler et al., 1996; Hoegh-Guldberg et al., 2008). Already we are seeing the decline of aquatic species, such as amphibians, which has been in part attributed to the rising UV levels (Häder et al., 2007). This project supported by APSF has kick-started a larger research program aimed at investigating how reef fish deal with current and future levels of UV radiation. We concentrated on investigating two defensive mechanisms fish may use for protection from UV radiation; (i) secretion of sunscreens into the external mucus, which has been hypothesised to prevent/reduce DNA damage and (ii) internal DNA repair, which specifically targets lesions caused by UV radiation.
Mucous cells in the epidermis continuously secrete mucus, covering the body of the fish. This mucus often contains UV-absorbing compounds, which are thought to protect the skin from UV damage (Zamzow & Losey, 2002). We have recently quantified and identified these as mycosporine-like amino acids (MAAs) in a range of parrotfish species (Eckes et al. 2008). We discovered that the quantity and the combination of MAAs appear to be highly variable and dependant on a variety of parameters.  We found that UV absorbance of P. amboinensis mucus increases with the size of the fish (Zamzow & Siebeck, 2006). When similar sized individuals from different locations are compared, a correlation is found between UV exposure and quantity and type of MAAs found. Animals stemming from deeper water that receive less UV also have less sunscreen protection than animals living in shallow water that are exposed to high levels of UV. Also, animals collected in near oligotrophic off-shore waters with high levels of UV-A and UV-B radiation have high quantities of MAAs with absorption peaks in the corresponding wavelength range. Animals stemming from more eutrophic coastal waters have lower quantities of MAAs and the absorption peaks of the MAAs found in their mucus lie mainly in the UV-A. We also showed that other contributing factors to the quantity of MAAs found in the mucus are likely to be health, gender and diet (Zamzow, 2004).

UV damage to DNA can be direct through absorption of UV (Sutherland & Griffin, 1981), or indirect through the actions of reactive oxygen species such as singlet oxygen generated by photosensitisers(Malloy et al., 1997). UV-induced DNA lesions include a range of photoproducts, amongst which cyclobutane pyrimidine dimers (CPDs) make up the largest proportion, followed by pyrimidine (6-4) pyrimidone photoproducts (Malloy et al., 1997). Both types of lesion may cause inhibition of embryonic and larval development, decrease survival by slowing transcription and mitosis, cause cell death and lead to energetic costs associated with DNA repair (Malloy et al., 1997), and have previously been used to quantify UV damage in eggs and larvae of a few marine fish species and planktonic crustaceans (Vetter et al., 1999; Young, 2006). CPDs can be repaired with two different processes, photoenzymatic repair and nucleotide excision repair (Todo et al., 1993; Malloy et al., 1997). The former system relies on the enzyme photolyase which requires UV-A to be activated before it can repair the UV-B-induced DNA damage and has been found to be the process mainly responsible for the removal of UV-induced cyclobutane pyrimidine dimmer lesions in various organisms, including Antarctic fish. The second part of this project was to test the effects of increased UV levels on reef fish cell damage and whether reef fish also possess internal repair mechanisms.

We demonstrated for the first time in a reef fish species, that the moon wrasse, Thalassoma lunare, has the ability to photo-repair DNA damage caused by elevated UV radiation. Fish, which lacked MAA protection and were blocked from photo-reactivation (by exposing them to UV-B only), had the highest proportion of DNA damage. Fish exposed to photo-reactivation wavelengths (UV-B followed by UV-A) had a significantly reduced amount of DNA damage. Both groups had higher UV damage than the control group exposed to ambient UV-A and UV-B levels. We also found a significant difference in DNA damage between fish with MAA-rich and MAA-poor mucus, however only in the condition in which photo-reactivation was prevented (UV-B only treatment). Thus, both mechanisms (external sunscreens and internal repair) are important mechanisms for reducing UV damage.  It appears the photolyase DNA repair mechanism can compensate for the lack of external protection and also that MAA protection is particularly important if photo-reactivation is impaired. Future research is directed to analyse the balance between the external and internal protective mechanisms in a variety of conditions.