Why so blue? Colour change in the chameleon grasshopper (Kosciuscola tristis) (APSF 09-7)

A project undertaken at the Department of Biological Sciences, Macquarie University, and supervised by Marie Herberstein and Kate Umbers

Rapid colour change in insects is extremely rare, yet in Australia such colour change has evolved independently in two disparate lineages. In both the dragonfly genus Austrolestes and the grasshopper genus Kosciuscola, males are able to change colour reversibly from black to bright blue (Veron 1974, Key & Day 1954a, b;). Veron (1974) suggested the dark phase in Austrolestes assisted in thermoregulation at low temperatures but could not explain the bright phase.  In Kosciuscola, this colour change is known to be controlled by changes in temperature (Key & Day 1954a, b; Figure 1), though its function remains unknown. Because this colour change is limited to one sex, it is possible that this trait may be under sexual selection. This hypothesis has so far not been tested. The aim of this project is to test the hypothesis that colour change of male K. tristis is a sexual signal. Bright males may gain a fitness advantage by being prefered by females or through detering rivals. 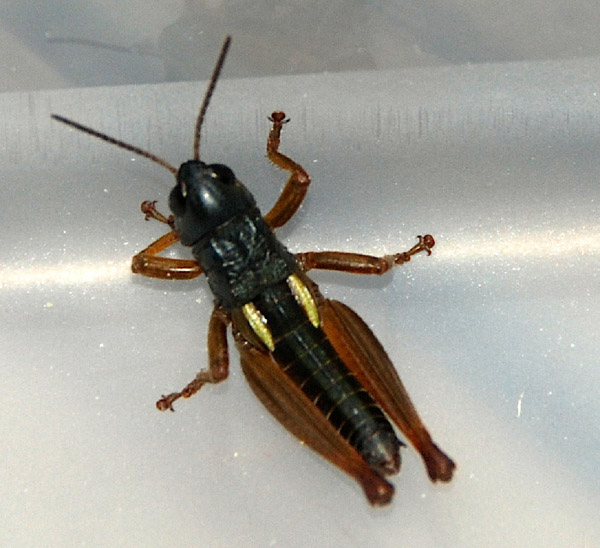 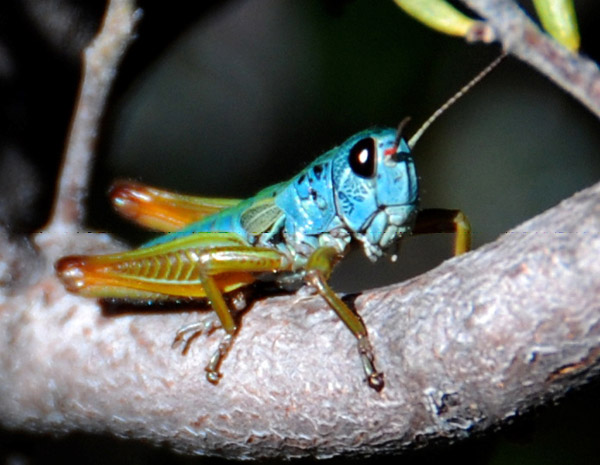 Three studies to date have focused on this unique temperature regulated colour change mechanism, most strikingly seen in male K. tristis (Filshie et al. 1975; Key & Day 1954a, b). Filshie et al. (1975) showed that colour change in male K. tristis is via an intracellular granule migration. Our intracellular images of female K. tristis show the same granule migration (Figure 2 in appendix) but further data suggest a masking pigment in the female cuticle that seems lacking in the male (Umbers unpbl). A male’s colour rapidly changes from black below 10ºC to bright blue above 25ºC (Key & Day, 1954b; Umbers unpbl.). The reversal of this colour change is remarkably slower, up to five hours (Umbers unpbl.). Key and Day (1954b) suggested that this colour change offers a thermoregulatory advantage, by allowing foraging and mate-searching outside optimal temperatures. Our preliminary data show that the bright colour of K. tristis does not reduce heat loading whatsoever (Umbers unpbl.) as suggested previously (Key & Day 1954a, b).  Surprisingly, no one has yet proposed a sexual signalling function for this colour change.

The objective of this project is to test if the colour blue and the ability to change from black to bright blue is a sexual signal in the chameleon grasshopper, K. tristis. This overall aim consists of the following hypotheses:

We will address these objectives using a combination of colour analyses, field observations and manipulative field and laboratory experiments.