A project undertaken at the Department of Zoology, University of Melbourne, and supervised by Paul Oliver

New Guinea is the fourth largest island on earth, and is a world hotspot of biological diversity and endemism. However it also remains one of the most poorly explored areas on earth. Few comprehensive molecular and morphological assessments of diversity have yet been undertaken within any diverse lineage from New Guinea. We also have little understanding of the historical processes that have generated New Guinea’s wealth of biological diversity. These gaps in understanding have major consequences for understanding the distribution and evolution of a diverse tropical island biota increasingly threatened by habitat loss and climate change. 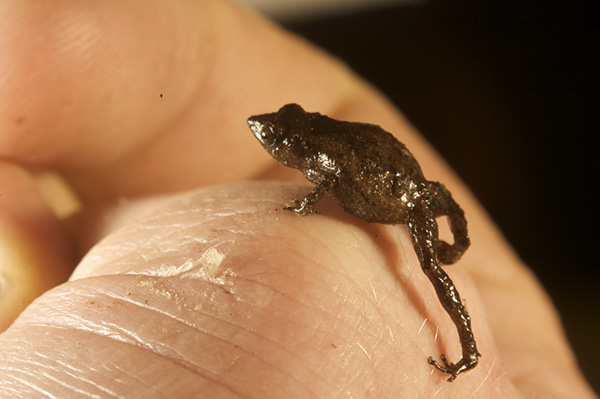 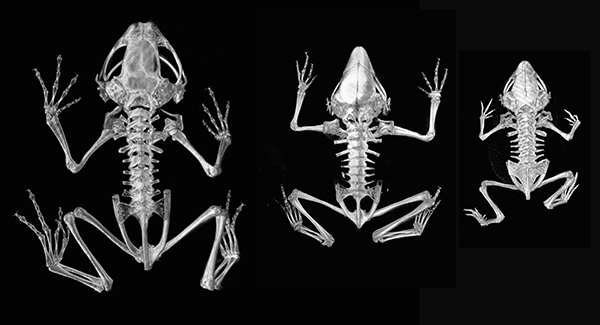 Figure 4. A new species of large green arboreal treefrog in the Litoria graminea group. This species is believed to use the webbing on hands and toes descend from high perchs by ‘parachuting’. Photograph. S. Richards. 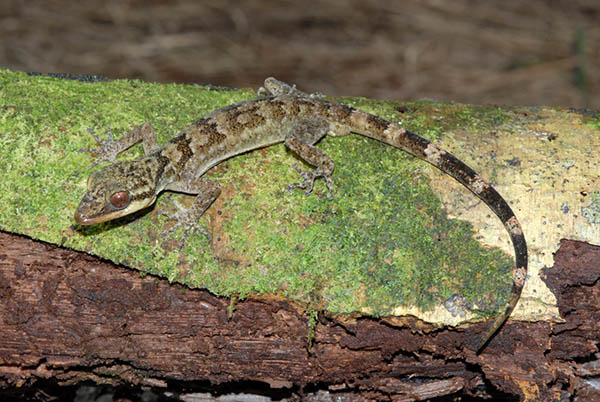 This project aimed to address these issues by completing and comparing molecular and morphological assessments of species diversity, phylogenetic relationships and biogeographic history within two lineages of frogs and one lineage of lizards.

Our honours student working on this project has compiled a near complete phylogeny for Choerophyrne, and a comprehensive phylogeny for Albericus. Analysis of evolutionary patterns in the former suggest that multiple lineages have independently colonised montane regions, that montane diversity in the north coast ranges is especially young and derived, and that body size and ecology (terrestrial vs arboreal) are all highly plastic and show some evidence of correlation (terrestrial montane species seem to be consistently amongst the the smallest). We also now have CT scans for over 20 species in this group, these have revealed unique anatomical structures and synapomorphies that we are in the process of properly characterising. At least five new species have also been discovered.

This spectacular group of large green frogs clearly consists of a radiation of outwardly similar lowland lineages that have mostly been lumped within a single species. However because of patchy sampling we need additional phylogenetic data to confirm the evolutionary distinctiveness of some of the divergent lineages we have identified. Morphological analyses have also revealed that one lineage within this radiation is characterised by increasing webbing on the hands – outwardly this seemed unusual for these highly arboreal frogs, however it appears to be an instance of convergent evolution. Field observations indicate that this webbing is an adaptation for parachuting, similar to behaviours recorded in frogs from Asia and America

Despite being a predominately a lowland group, we have confirmed that at least one lineage (consisting entirely of new species recognised in the last five years) has adapted to montane habitats. The wide and disjunct distribution and low genetic diversity of species in this lineage also suggest that (contra the pattern in Choerophyrne) there has been significant recent geneflow between montane isolates. Analysis of body size evolution in these geckos has also revealed a fundamental shift in evolutionary trajectory as this widespread radiation crossed Wallace’s Line; Melanesian species are far larger than their Asian relatives. This shift in evolutionary trajectory appears to be correlated with evolutionary release after crossing through this famous biogeographic zone. Finally, we have also discovered at least eight previously unrecognized species.

Finally this project has provided support for an enthusiastic early career researcher (Amy Iannella) at the University of Adelaide and South Australian Museum, who is now enrolled in PhD program in the sciences.

Related publications accepted or in press: