A project undertaken at the Department of Zoology, La Trobe University, and supervised by Martin Steinbauer

Psyllids (Hemiptera: Sternorrhyncha: Psylloidea) are closely related to aphids but, in Australia, psyllids comprise a richer suite of species and are ecologically and economically more significant than endemic aphids. Outbreaks of some species can be responsible for severe defoliation and dieback of eucalypts (especially when in association with bell miners and/or other environmental factors) but psyllids are also a key source of food in natural ecosystems (Steinbauer et al. 2014). Since Eucalyptus is the most important hardwood species around the world, a number of Australian species are now invasive pests where eucalypts are grown. 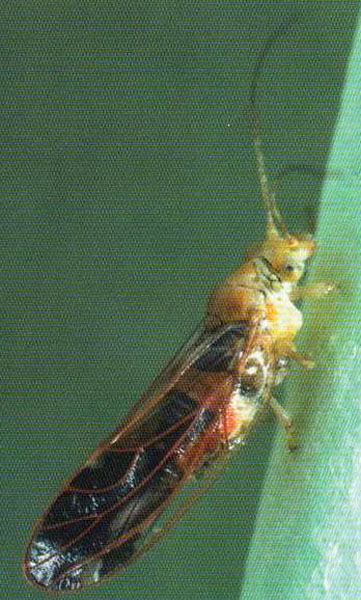 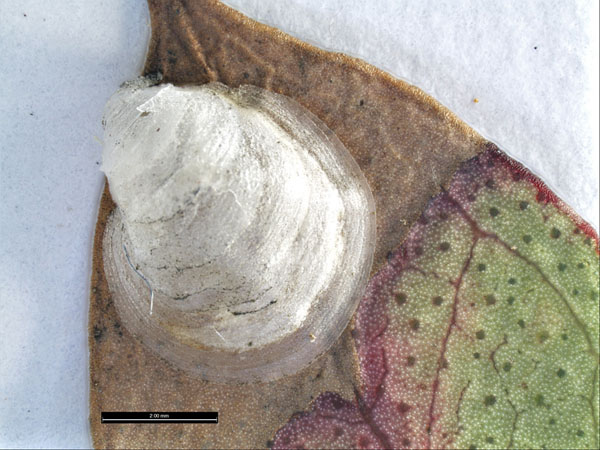 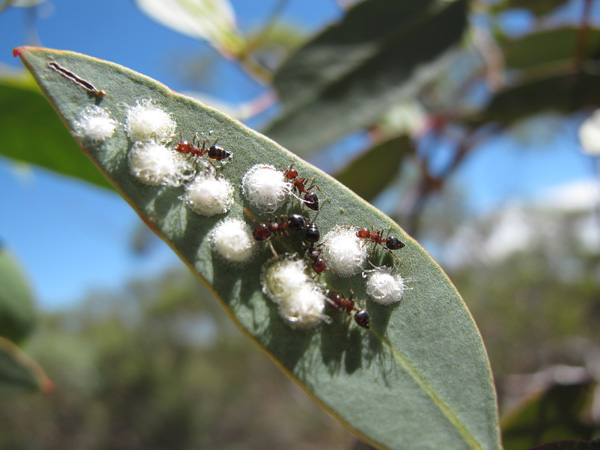 Figure 3. Ants of a Crematogaster species tending the nymphs of a Glycaspis species of psyllid feeding on Eucalyptus dumosa.

Fluctuations in the abundance of psyllids have been attributed to changes in host quality, typically in response to changes in climatic and edaphic conditions. To better understand and perhaps even predict outbreaks, we need to understand psyllid utilisation of hosts. Providing this information was the focus of this project. In selecting species of psyllid for this project, we found and described two new species (Burckhardt et al. 2013; Taylor et al. 2013).

Psyllid use of olfaction and vision to locate & select hosts

Prior to this research, the relative importance of olfactory versus visual cues in mediating host location and selection by eucalypt-feeding psyllids was completely unknown. Using a Y-tube olfactometer, the attraction of four species to the odours of their host eucalypts was studied. Adult Ctenarytaina eucalypti, C. bipartita and Anoeconeossa bundoorensis were not significantly more attracted to host volatiles (E. globulus, E. kitsoniana and E. camaldulensis, respectively) than they were to clean air. Adult Glycaspis brimblecombei were also not attracted to the odour of E. camaldulensis but were attracted to the odours of a non-host (Corymbia citriodora). Adults of all species were repelled by abnormally high concentrations of eucalypt volatiles, e.g. from crushed leaves. These findings are in preparation for publication (Farnier & Steinbauer in prep.). Collaborative research with Swedish colleagues at Lund University revealed that C. eucalypti has sensory neurons sensitive to a range of common eucalypt terpenoids and green leaf volatiles (Yuvaraj et al. 2013).

When it became apparent that psyllid attraction to hosts could not be reliably explained as mediated by olfactory cues, the possible influence of visual cues was investigated. Clear and consistent differences in attraction to preferred colours were observed using the same four psyllids. The two free-living, shoot-feeding species C. eucalypti and C. bipartita preferred green/yellow colours to red and grey. Similar colour preferences are common among aphids. By contrast, A. bundoorensis (free-living, feeds on expanding foliage) and G. brimblecombei (lerp-forming, feeds on expanding foliage) preferred red to green/yellow and grey. Additional bioassay results indicate that this attraction is not mediated achromatically. Consequently, it is possible that these two species have colour vision and that they may select leaves on the basis of their age using visual cues. These findings are either presently under journal review (Farnier, Dyer & Steinbauer in review) or are in preparation for publication (Farnier, Dyer, Peters & Steinbauer in prep.).

Species such as C. eucalypti and C. bipartita feed and oviposit in the apical shoots of hosts. One reason why they could exhibit this behaviour is to utilise young host modules of the highest nutritional quality, i.e. with higher concentrations of nutrients and moisture. The abundance of nymphs of these two species on leaves of E. globulus and E. kitsoniana, respectively, at different stages of development (expanding through to fully expanded) was investigated to identify possible explanatory correlations with shoot vigour and concentrations of free amino acids. Nymphs were not more abundant on shoots with greater vigour (Steinbauer 2013). The abundance of C. eucalypti nymphs was positively correlated with concentrations of methionine, valine and threonine while the abundance of C. bipartita nymphs was positively correlated with the concentration of leucine. While female selection of apical shoots for oviposition may be an adaptation linked to the nutritional quality of these modules, the architecture of the bud (which creates a high humidity microhabitat) could be another selective pressure influencing site-specific oviposition. Most psyllid eggs and nymphs are highly susceptible to desiccation and, because free-living species such as C. eucalypti and C. bipartita do not live beneath a lerp or inside a gall, they rely on the high humidity microhabitats created by their hosts.

Unlike species whose offspring feed on expanding leaves, psyllids that feed on fully expanded eucalypt leaves (exposed to direct insolation) utilise modules of much poorer quality. Some 50% of Australia’s endemic psyllids produce small shelters as nymphs which are called lerps. The lerp is presumed to limit the rate at which water vapour is lost upon reaching the leaf surface as well as screening the solar radiation reaching the nymph. However, living beneath a lerp forces the nymph to feed from the same small area. Possibly as a consequence, nymphs of some genera ameliorate the quality of host tissues; the symptoms of this behaviour are leaf chlorosis, possibly followed by reddening (due to production of anthocyanins), necrosis of affected areas and premature leaf abscission. Cardiaspina species are among this group of psyllids and are linked to the most serious cases of eucalypt defoliation. Using a natural irruption of Cardiaspina near densitexta on E. moluccana in NSW, evidence supporting host amelioration was obtained. Higher abundances of nymphs were associated with leaf chlorosis (due to loss of chlorophyll) and higher concentrations of six essential amino acids (Steinbauer et al. in review). However, nymphs were not substantially larger at higher abundances, presumably as a consequence of intra-specific competition. Using a natural irruption of C. densitexta on E. fasciculosa in SA, the survival of nymphs, rate of death of red, damaged areas as well as the changes in concentrations of free amino acids, chlorophyll, anthocyanins and total phenols associated with feeding by nymphs was studied over seven months. The influence of changes in phenol concentrations on the survival and ontogeny of nymphs will be a particular focus of the manuscript arising from this research.

APSF funding permitted MJS to be assisted in this research by Derek Wrede, Anna Burns, Juan Hernandez and Mike Dann.