Why are there so few hybrids in the Green-eyed Treefrog hybrid zone? Resolving the role of behaviour versus genetics (APSF 11-8)

A project undertaken at the School of Marine and Tropical Biology, James Cook University, and supervised by Dr Conrad Hoskin & Dr Megan Higgie

The question of how species are formed (speciation) remains an integral question in evolutionary biology. Particularly topical is the plausibility and importance of the process of ‘reinforcement’, in which premating isolation and speciation can evolve between two lineages due to natural selection against maladaptive hybridization. The Green-eyed Treefrog (Litoria serrata) is a rainforest frog restricted to the Wet Tropics region of north-east Queensland. It consists of two deeply divergent lineages (northern and southern) that meet in hybrid zones in the central Wet Tropics (in the mountains behind Cairns). Reinforcement has led to speciation between the two lineages at one hybrid zone (to form Litoria myola, Hoskin 2007), but apparently not at an independent hybrid zone approximately 12 km to the south in Lamb Range (Hoskin et al. 2005). Over the last few years we have been studying these hybrid zones in detail to address the question of why reinforcement occurred at one hybrid zone but apparently not at the other. Interestingly, we have found that there are very few hybrids at both hybrid zones. This was expected for the hybrid zone where reinforcement has occurred (where premating isolation is strong) but the rarity of hybrids at the other hybrid zone is surprising. We used funding from the Australia and Pacific Science Foundation to work out what limits hybridization between the two lineages in these hybrid zones. 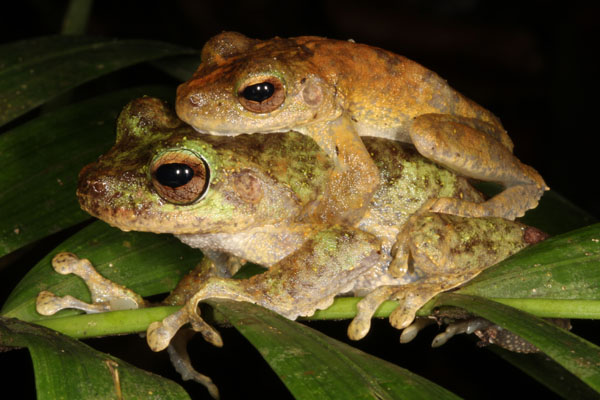 Figure 1. On one of the hybrid zones a male Green-eyed Treefrog (Litoria serrata) clings to the back of the much larger female in a breeding embrace called amplexus (Photo: Conrad Hoskin). 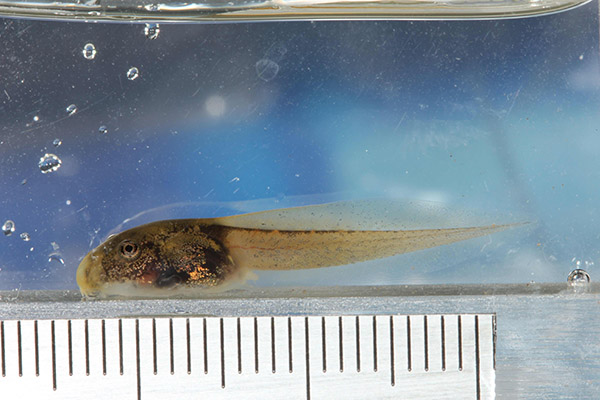 The two possibilities we tested were:

1. Female mate choice has been reinforced in both hybrid zones such that they correctly choose the calls of males of their own lineage (i.e. premating isolation limits hybridization).

2. Females do not display strong choice for their own lineage but few hybrid offspring survive to adulthood due to substantial genetic incompatibility between the two lineages (i.e. postmating isolation).

We studied mate choice and hybrid tadpole frequency in the hybrid zones to test between these two alternatives. The results will contribute towards understanding the processes that determine whether reinforcement occurs in hybrid zones and the importance of hybrid zones in generating diversity.

What did we find?

We sampled many pairs in amplexus (breeding embrace) through the middle of both hybrid zones and ran the genetics to work out who was mating with who. We found plenty of pairs mismatched for lineage and we are currently analysing this data to quantify the level of premating isolation seen in the wild at both hybrid zones.

So, all in all, we found a complex array of interesting results. We are analysing these in detail now and papers are in preparation on premating and postmating isolation in the hybrid zones. So stay tuned for the final conclusions…

Hoskin CJ. 2007. Description, biology and conservation of a new species of Australian tree frog (Anura: Hylidae: Litoria) and an assessment of the remaining populations of Litoria genimaculata Horst, 1883: systematic and conservation implications of an unusual speciation event. Biological Journal of the Linnean Society 91: 549-563.