A project undertaken at the Jordan Laboratory, The University of Adelaide and supervised by James Menzies

Considering its land area, New Guinea probably has more frog species than any other wet tropical region despite having only four endemic frog families. Borneo, for instance has five frog families in its fauna. The reason for this is probably the highly diverse environment where habitats can change dramatically over short distances, resulting in the evolution of many ‘sibling species’ that are difficult to distinguish by their external features. 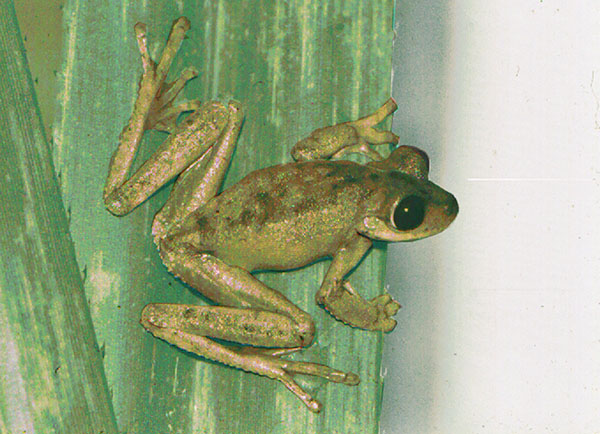 One example of this is the genus Nyctimystes, tree frogs most abundant in the hill forest to lower montane forest zones. At the last comprehensive revision of the genus, in 1958,14 species were known but now, due to new discoveries and taxonomic  revisions, the total is 31. The largest section in this diverse genus is the cheesmanae group of species, including 15 medium sized brown frogs. If the frogs all look similar, how do they recognise each other at night? They probably have excellent night vision and some species, at least have rather pungent odours that may be species specific. But, for most species, if appears to be the voice of the male frog that is the important reproductive isolating mechanism.

Male frogs of the Nyctimystes cheesmanae group all have calls consisting of long trains of similar notes with a rough barking sound, without any musical character. Figure 1. shows three examples of their notes:

Conclusions are speculative, of course, and without actually being a female frog one cannot know what turns them on. Females can be tested, under studio conditions, but this is not easy in the mountains of New Guinea.