Old-growth trees accumulate ‘canopy soil’ on branches.  Canopy soil not only provides a substrate for epiphytic plants and lichens, but also supports and nourishes microbial communities that include mycorrhizal fungi.  Canopy soil is likely to mediate and influence host plant and epiphyte interactions: for example, in silver beech, roots of both epiphytes and host tree grow into the canopy soil, and canopy soil provides ectomycorrhizal fungi for adventitious roots of the host tree.  As ‘islands’ of soil, we predict that the makeup of aerial microbial communities is likely to be influenced by organismal life-history strategies and dispersal limitation (i.e., an inability to disperse to the aerial microhabitat due to either intrinsic or extrinsic traits), and we hypothesise this has led to an aerial microbial community that is differentiated from the terrestrial community, resulting in niche differentiation at the forest scale.  We will use DNA sequencing to determine the diversity of fungal and bacterial communities in the canopy and neighbouring terrestrial soils of two old-growth temperate rainforest tree species 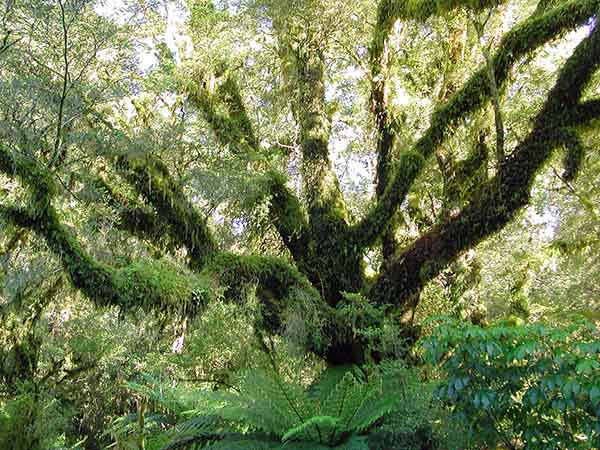 Results indicate that ectomycorrhizal fungal canopy communities (from hyphal ingrowth bags) in L. menziesii trees are not significantly different in richness, evenness or diversity from the terrestrial communities, but there is significant differential representation of species in either canopy of ground, indicating that the canopy offers a unique habitat for some ectomycorrhizal species.  The canopy communities show evidence of vertical stratification in the forest fungal communities. We found that non-ectomycorrhizal fungi (~ 20% of the species in the hyphal ingrowth bags) were significantly different in diversity between canopy and ground, most likely due to differences in organic matter in the canopy and the presence of epiphytes in the canopy soils.

We are undertaking analysis by mixed-effect modelling to determine how soil fungal and bacterial diversity are influenced by: