A project undertaken at the Australian Museum, Sydney, and supervised by R Torrence

As part of the expansion of the oil palm industry in West New Britain, large areas of secondary rain forest and old coconut plantations have been cleared and terraced.  These development activities have exposed and disturbed many archaeological sites.  In 1999 and 2000 teams of archaeologists from the Australian Museum, University of Sydney, Southern Cross University, University of PNG and the National Museum of PNG assisted by volunteers from Australia, UK and PNG surveyed recently bulldozed hills and ploughed fields on five plantations (Numundo, Haella, Gulu, Tili, Kulu-Dagi) which cut across the southern end of the Willaumez Peninsula.  A large number of archaeological sites containing stone artefacts, ceramics, glass beads, and shell middens were discovered.  Excavations at 17 locations helped clarify the chronology of the finds by putting them within their stratigraphic context and by recovering organic material for radiocarbon dating. 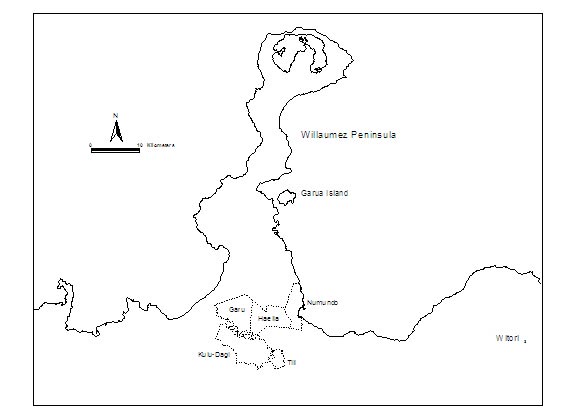 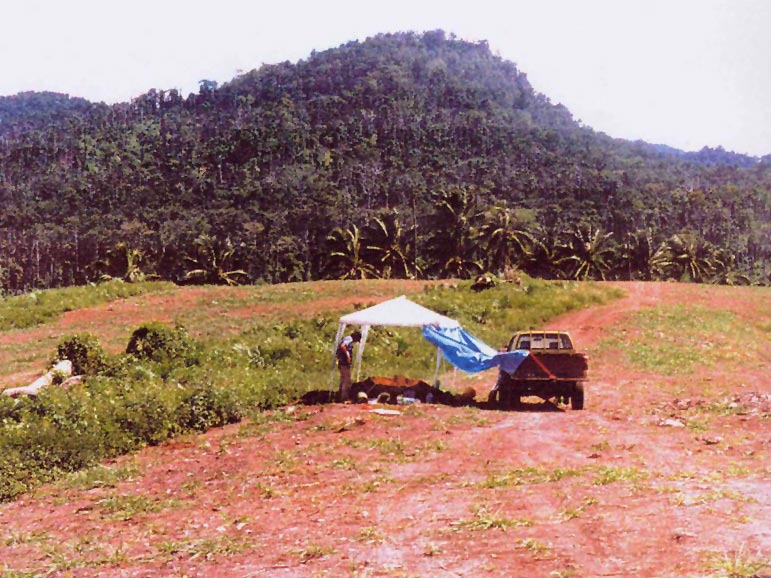 Excavations in progress at a test pit on Numundo Plantation.  Clearance by bulldozer has removed the topsoil revealing a dense cluster of obsidian artifacts, shell midden and over stones. 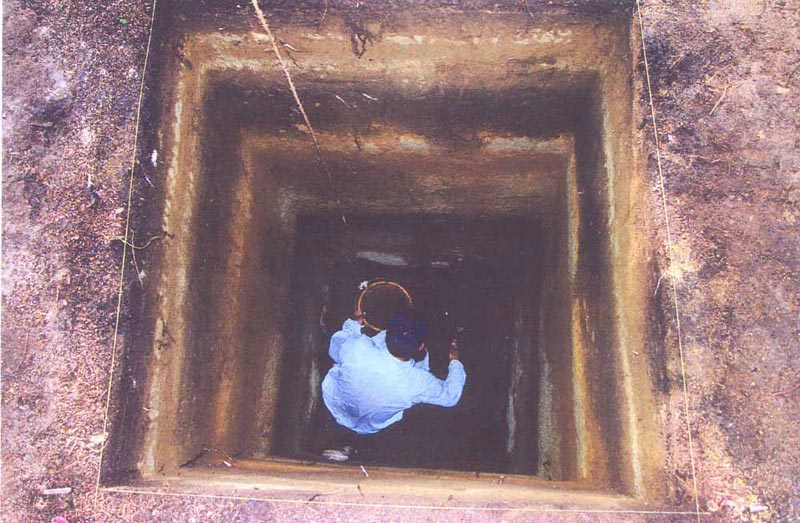 The excellent preservation of  7 ancient landscapes (dark layers) sealed between different volcanic ashes (light layers) makes the Willaumez Peninsula an important place for archaeological research.  The obsidian artifacts recovered from the base of this pit date to more than 6,000 years ago. 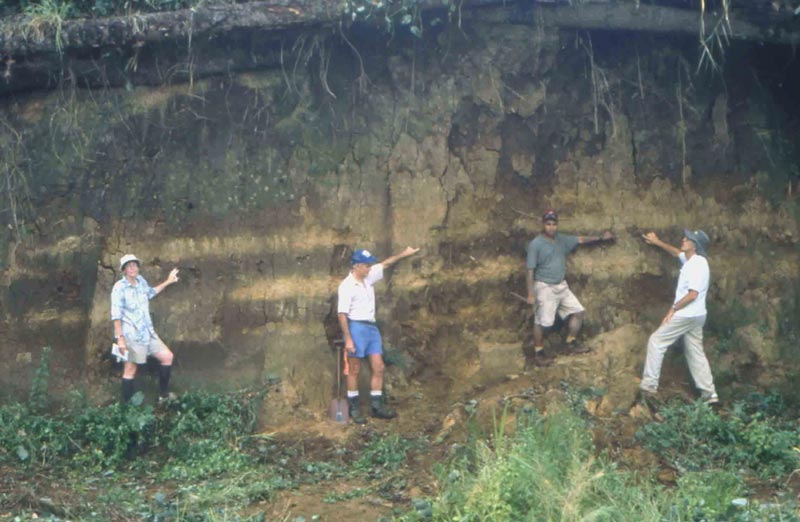 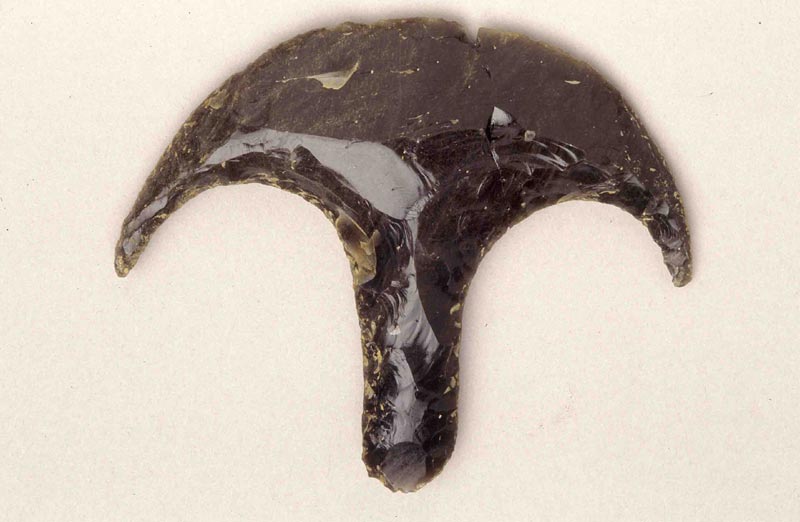 A highly worked stemmed tool found on Boku Hill, Garu Plantation which dates between 3,500-10,000 years ago was possibly a valued item representing the owner’s status.

One of the most important discoveries was the presence of obsidian artefacts stratified between a number of volcanic layers that date well back into the Pleistocene period and may represent the earliest colonisation of New Britain c. 35,000 years ago.  A small pile of burned stone, possibly the remains of a roasting pit was also exposed in the walls of the quarry, suggesting that this was a camping place.  The fieldwork also revealed a complex history of human settlement which has been punctuated by 7 volcanic eruptions from the Witori volcano and 2 eruptions from unknown local volcanoes during the past 6,000 years.  After each eruption the local environment was radically changed and the region was depopulated for various lengths of time.  Although the region was eventually recolonised, major changes occurred with the loss of highly retouched stone tools after c. 3600 years ago and the short-lived use of pottery c. 3200-1800 years ago.

One of the most important results has been the finding of many archaeological sites within the inland region.  In contrary to previous belief, even the currently swampy areas were heavily utilised throughout prehistory, including during the time of Lapita pottery.  The finding on a bulldozed terrace at Boku Hill (10 km inland) of highly worked, large obsidian artefacts which might have been status items before c. 3600 years ago and Lapita pottery dating to c. 3000-1800 years ago indicate that human activity was not focused on the coast, as many archaeologists have previously argued. In addition, the density of archaeological material in the study area suggests that the pre-European population was much higher and was probably seriously affected by introduced diseases.

This preliminary study demonstrates the importance of detailed archaeological survey, “beyond the beach” in inland areas that have been overlooked for revealing new patterns of human prehistory in PNG.  The very rich and well preserved archaeological record of the Willaumez Peninsula also provides an important opportunity to understand long-term patterns of human adaptation to a very risky environment dominated by frequent volcanic activity.  Following the success of this fieldwork, the inter-disciplinary team expanded their studies in 2001-2 with the assistance of funds from the Australian Research Council.

Publications resulting from this research

More information is available at

The full field reports can be viewed at