A project undertaken at the Australian Centre for Tropical Freshwater Research, James Cook University, Townsville, and supervised by J Dowe

To further research into the palm genus Livistona (Arecaceae) in Papua New Guinea, an expedition, funded by the Pacific Biological Foundation, to the Louisiade Archipelago was undertaken in May 2001. This article provides a background to the expedition, and a summary of results.

The history of botanical exploration in New Guinea can be divided into eras determined by the presence and influence of the various colonial and administrative powers, including the Dutch, the Germans, the Australians and since independence, the Papua New Guineans. One result of this situation is that in the taxonomy of the palm family in New Guinea, many species have been independently described by botanists of the various colonial powers, and therefore some species have been given a number of names for what is indeed a single species. As part of on-going research into the palms of New Guinea, resolution of this taxonomic confusion has provided palm botanists with an extraordinarily complex situation. Unfortunately, many of the names of palm species in New Guinea described by the early colonial botanists are not supported by type specimens, or if available, they are of poor quality. For example, in the case of those names established by German botanists, many type specimens were lost because of the destruction of the Berlin herbarium during the Second World War. Among the genera that have a problematic taxonomic history, because of the lack of type specimens, are Calamus, Calyptrocalyx, Linospadix and Livistona, among others. 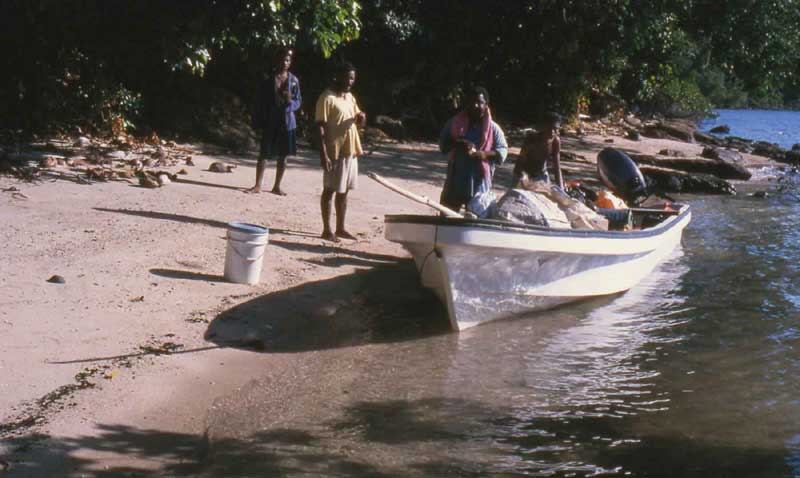 Figure 1. The expedition ‘vessel’, a 5 m banana boat, used to cross open-ocean between Misima, and the main islands of the Louisiade Archipelago, Milne Bay Province, Papua New Guinea, during the May 2001 expedition. All supplies, including fuel and food, and specimen collecting utensils and materials, were carried in the boat. 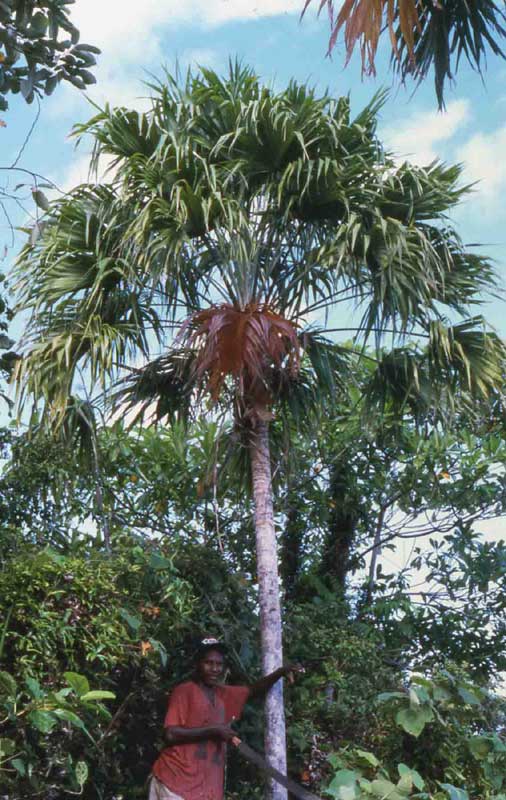 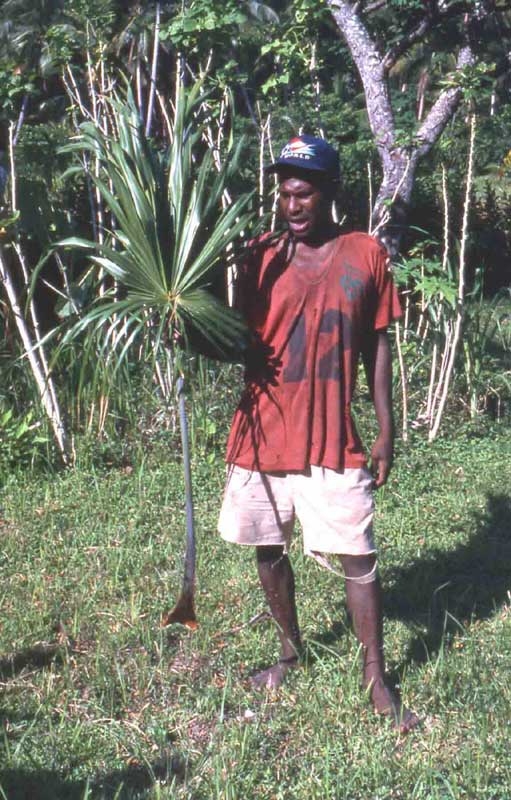 Figure 3. All samples, such as this leaf of Livistona woodfordii, were photographed before being preserved in alcohol and sealed in plastic bags. 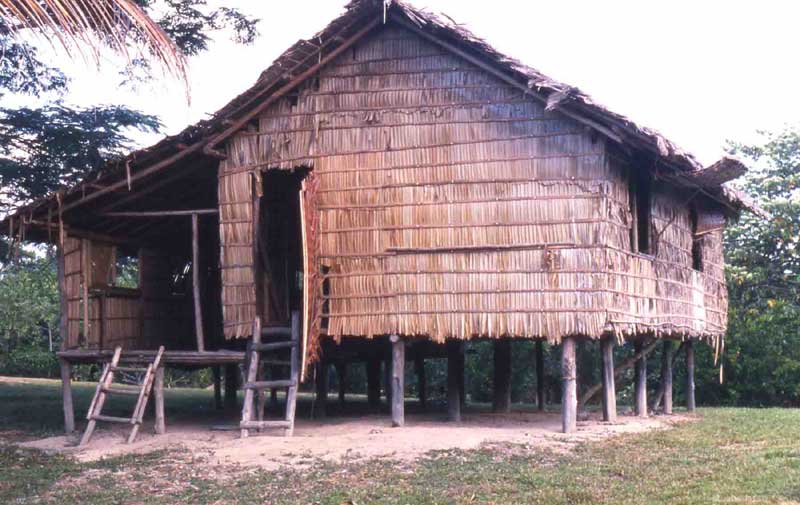 Figure 4. Accommodation during the expedition consisted of houses such as this on Sudest Island. Upon examination of the structure, it was observed that apart from the support stumps [an unknown tree species] and the outside walls [Poaceae sp.], the structure is made from materials derived from palms. The roof is made from a coconut leaf thatch, and the floors and interior walls are made from split stems of a species of Hydriastele. 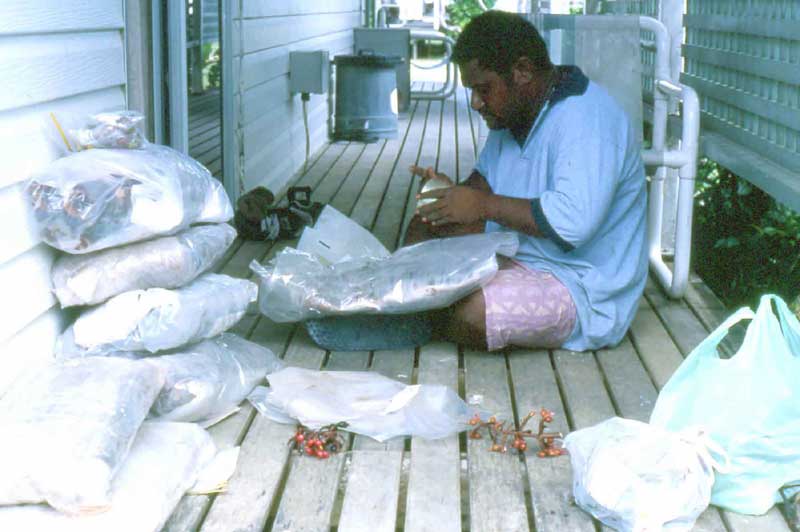 Figure 5. Specimens being prepared for dispatch by Forestry Research Institute botanist Roy Banka. For preservation, specimens are doused in alcohol and sealed in plastic bags. Specimens treated by this method may last more than one month before they are processed into dried herbarium specimens. 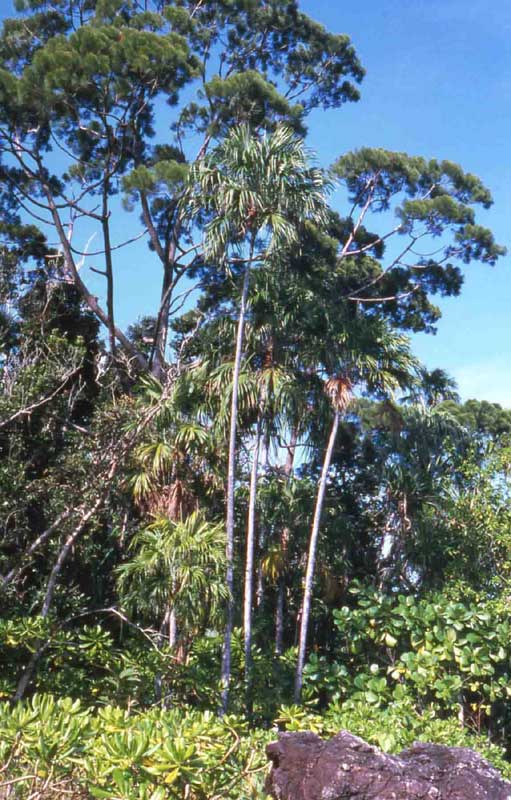 My personal interest in recent years has been with Livistona, a genus that I am presently revising over its entire geographical range. The species of Livistona are generally tall fan palms, and occur in a range of habitats from semi-desert to rainforest, though greatest diversity occurs in open forest and savannahs. Livistona has about 35 species, of which 18 occur in Australia, seven in New Guinea, and the remainder in South-east Asia and with an outlier in north-east Africa. One of the Livistona species in New Guinea that had an unresolved taxonomy was a species originally collected in the Louisiade Archipelago in 1888 by William Macgregor. This taxon was subsequently named Livistona beccariana by Max Burret in 1941. Subsequently, a Livistona was collected from the Solomon Islands in 1898 and named Livistona woodfordii by Ridley in the same year. The type specimens of both these taxa were conserved in the Berlin herbarium, but were regrettably destroyed during the Second World War. During examination of some recently collected specimens of Livistona from both the Louisiades and the Solomon Islands, it became apparent that indeed these two names – L. beccariana and L. woodfordii – might refer to a single taxon. The recently collected specimens from the Solomon Islands were of excellent quality, but those from the Louisiades were lacking some organs or were otherwise not of good enough quality to make a final decision. To resolve this, a field trip to the Louisiades was proposed in order to locate the Livistona there, and to make herbarium collections upon which a taxonomic decision could be unequivocally made.

An application was made to the Pacific Biological Foundation for funding the expedition, and sufficient funds were granted to undertake the expedition in May 2001 in collaboration with the Forest Research Institute of Papua New Guinea, and the PNG botanist Mr Roy Banka from Lae Herbarium. Details of the expedition will not be presented here but an account was provided in Dowe and Banka (2002).

The success of the expedition has allowed me to resolve the taxonomy of Livistona from the Solomon Islands and the Louisiades, and which is indeed a single taxon. Based on the nomenclatural rule of priority, the correct name for this species is L. woodfordii, which is the name originally applied in 1898 by Ridley to the population in the Solomon Islands. The name L. beccariana, the name originally applied to the Louisiade populations by Burret in 1941, is therefore relegated to synonymy.