A project undertaken at the Institute of Applied Sciences, University of the south Pacific, Fiji, and supervised by C Morrison

Fiji has two species of endemic frog, the ground frog Platymantis vitianus and the tree frog P. vitiensis. The ground frog, P. vitianus is the rarer of the two species and is listed as Endangered (EN B1 + 2c) under current IUCN (2002) criteria. Platymantis vitianus has been recorded from the mainland of Viti Levu and Vanua Levu and the smaller islands of Taveuni, Ovalau, Beqa, Kadavu, Gau, and Viwa  in eastern Fiji. Recent severe population declines (believed to be correlated with mongoose, rat and cane toad distributions), have resulted in potential extirpation from the mainland and several other islands and today populations are only known from five islands – Taveuni, Kadavu, Ovalau, Gau and Viwa.

The limited ecological data available suggests that P. vitianus lays <50 eggs in moist situations under rotted wood on the ground or within rotted logs. The eggs are large (4-7mm diameter) and there is no tadpole stage. Little else is known about its ecology. 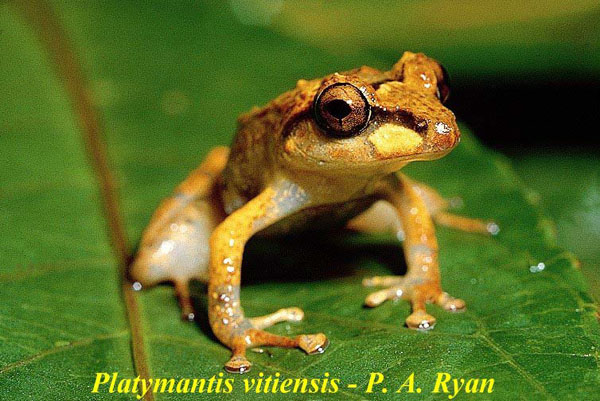 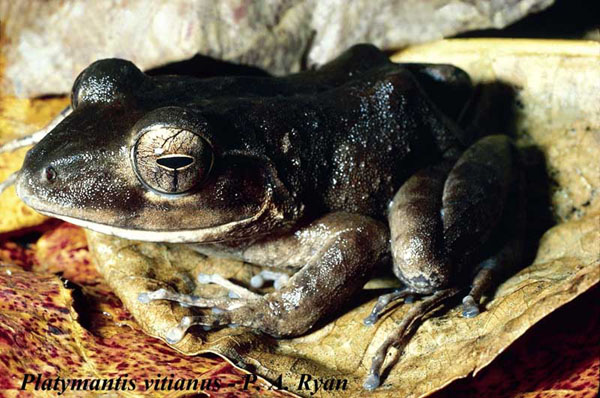 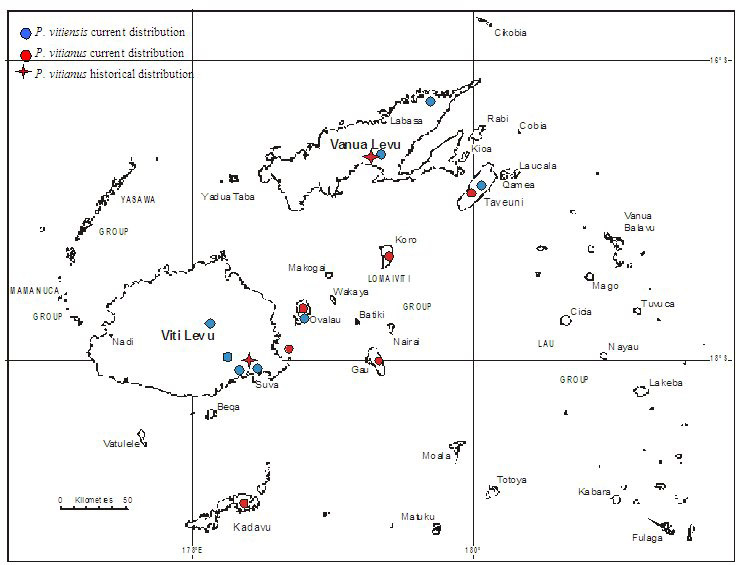 Distribution of the two species in Fiji

The distribution of Platymantis vitiensis is not as restricted as P. vitianus which may be an artefact of its arboreal nature. Platymantis vitiensis is often associated with pandanus, banana and common lily plants sheltering in the leaf axils by day and emerging at night to feed off insects on the leaves. It lays < 30 eggs in the leaf axils of these plants and like P. vitianus there is no tadpole stage.

To date, interest in the distribution of P. vitianus and P. vitiensis has been limited and consequently there are several other islands in the eastern part of Fiji that have been identified as potential sites that remain to be surveyed. Also, despite the likely extirpation of P. vitianus from mainland Viti Levu (believed to be correlated with mongoose and cane toad distributions), there remain several sites where the species may still occur. These sites are generally very remote and heavily forested areas in the central region of Viti Levu and have not been previously surveyed for either species.

The majority of the land in Fiji is owned by indigenous Fijians and very little is set aside as reserves or conservation areas. The National Trust of Fiji is currently attempting to identify areas of biological and cultural importance in order to establish conservation areas within the country. The identification of mainland sites with populations of the endangered P. vitianus and, to a lesser extent, P. vitiensis will be used to help the National Trust of Fiji in selecting conservation areas as well as providing justification for the selection of the sites.

The overall aim of this study is to survey the distribution and abundance of P. vitianus and P. vitiensis on Viti Levu, Fiji with a view to identifying suitable sites for long-term ecological studies and identifying important management and conservation areas. Through extensive field surveys and predictive modelling based on identified habitat requirements, our anticipated outcomes include: