A project undertaken at the School of Environmentaal and Rural Science, University of New England, and supervised by Dr James O’Hanlon

Ants provide many essential ecosystem services such as pollination, bioturbation and nutrient cycling. One of the most crucial services they provide is seed dispersal. There are many plants that have evolved special seeds that have a ‘capitulum’ – a food reward for ants that pick up and carry the plant seed underground. In Australia this interaction is helping plant seeds cope with fire, predators, and weathered, nutrient poor soils. 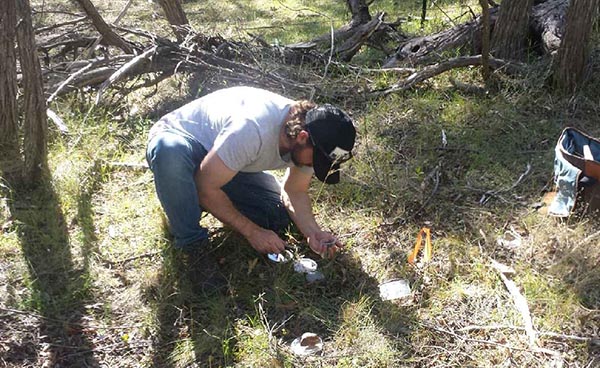 I set out to understand what affect ants were having on the characteristics of Australia’s forests. I wanted to know where in the landscape ants were the most effective seed dispersers. I surveyed the seed dispersal behaviour of ants across NSW. I did this in a range of diverse habitat types including across coastal rainforest, arid scrublands, alpine peaks, and eucalypt woodlands. I sampled ants as far north as Coffs Harbour, as far west as Bourke, and as far south as the Snowy Mountains. My sites were as high as the alpine peaks of Kosciuszko National Park, and as low down as the coastal sands of Royal National Park.

Preliminary analyses show that dispersal of seeds by ants is more common in arid areas and mid-altitudes. What makes this particular result intriguing is that in biology and ecology we usually expect wet rainforest regions to have more abundant and diverse plants and animals, thus we might predict more biological interactions to occur. In the case of seed dispersal, ants may be bucking this trend and there seem to be more ecological interactions between ants and plants happening in dry arid areas. I am still churning through ant samples and analysing data and will hopefully be able to answer questions as to why this is the case. Do arid regions have more abundant and diverse communities? Are the ants in arid areas better suited to be seed dispersers? Answering these questions will tell us how ants influence the formation of forests, what types of forests might be better protected against disturbances such as bushfires, and how insects can play a role in assisting with reforestation programs and habitat management.

© 2021 The Australia and Pacific Science Foundation. Website by Allure Digital